Summary: Rotational musical instrument interfaces are a very intuitive representation of the fundamentals of music itself, as they are inherently simple oscillators that can run from low control frequencies up to audio. Parameters like pitch (e.g. glass haramonica and hurdy-gurdy), tempo (e.g. Drum Buddy), sample playback (e.g. CDJ, turntable), and delay time (e.g. tape flanging) can be easily represented and manipulated in the rotational domain. The downside of many rotating instruments is that they are bounded by the rotating mechanisms themselves, that being a fixed axle where the rotation is driven by a hand or a motor. This leads to a reduction of the performer’s expressive ability to influence the generated sound by constraining them to fixed locations and/or positions. In this work, I avoid these drawbacks, but maintain the affordance of the rotational interface by incorporating non-contact sensing and wireless data transfer.

Audio synthesizers and controllers exist in many forms with devices ranging in affordances to create different sounds out of a combination of oscillators, filters, and effects. For light-based synthesizer systems, transmitted light can be modulated in specific patterns to change virtually any characteristic of a sound that is produced by photodiode exposure. An example is Jacques Dudon’s photosonic instrument from the 1980s, which was composed of a photodiode, light source, semi-transparent rotating disk, and an optical filter. The disk was patterned in such a way that when rotated, the intensity of light passing through it changes at audio frequencies (like an optical sound track on a film, or vintage optical samplers like the Optigan), and was further operated on by the handheld filter or manually moving the lightsource and/or photodetector, so that the analog signal generated by the photodiode’s exposure represented the user’s physical manipulations as well as the audio coming from the spinning disc. Similar to that, Mr. Quintron’s Drum Buddy modulated a light source by a series of slits in an encapsulating rotating canister that was sensed by a series of photodiodes positioned around the perimeter (a legacy dating to Leon Theremin’s Rhythmicon). As with Dudon’s instrument, the rate of rotation of the canister and light photodiode exposure could be manipulated by the performer to generate different sound effects and rhythms. However, like many rotation-based instruments, both Dudon’s and Quintron’s devices were stationary and physically constrained the performer. That is why I created the CD Synthesizer (CD-Synth), a mobile synthesizer which allows the user to freely rotate the instrument and manipulate the orientation while exploiting non-contact sensing for a truly expressive performance. The device has another legacy in multimodal handheld or wearable manual controllers like Michel Waisvisz’s well-known ‘Hands’, which measure free gesture along with various kinds of finger control. My addition of the spinning disk, however, marries these controllers with a handheld spinner, which adds an agile, tactile, mechanical low frequency oscillator (LFO) that also works as an engaging display. 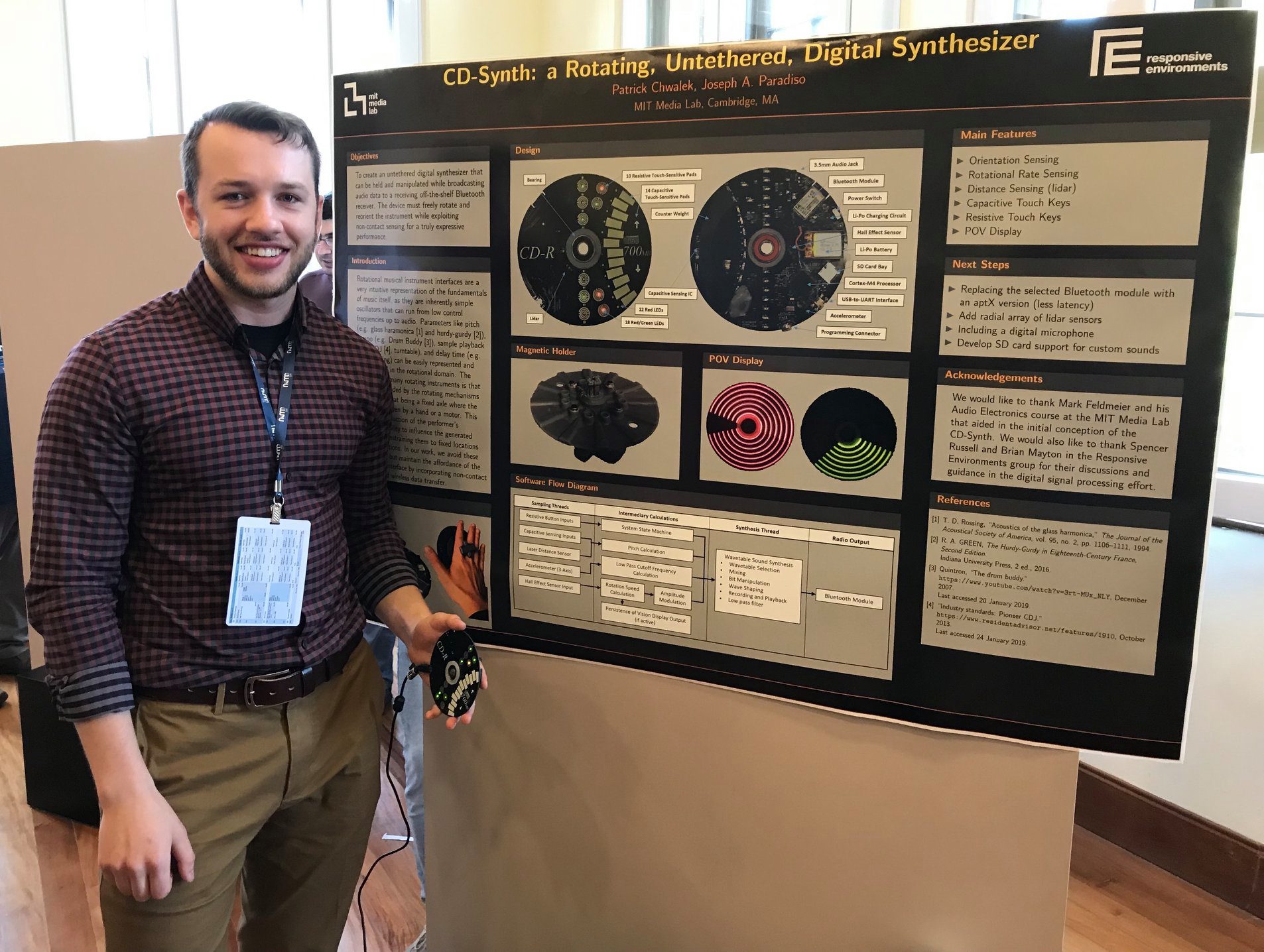 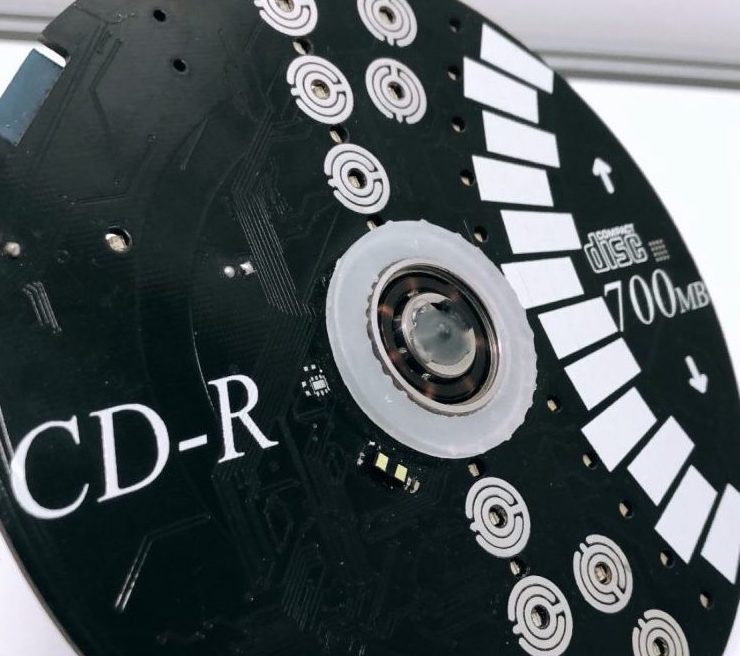 There are 14 capacitive and 10 resistive buttons on the front. There is also a LIDAR near the center of the device.

FreeRTOS is used to manage the various software subsystems and sensor sampling logic. 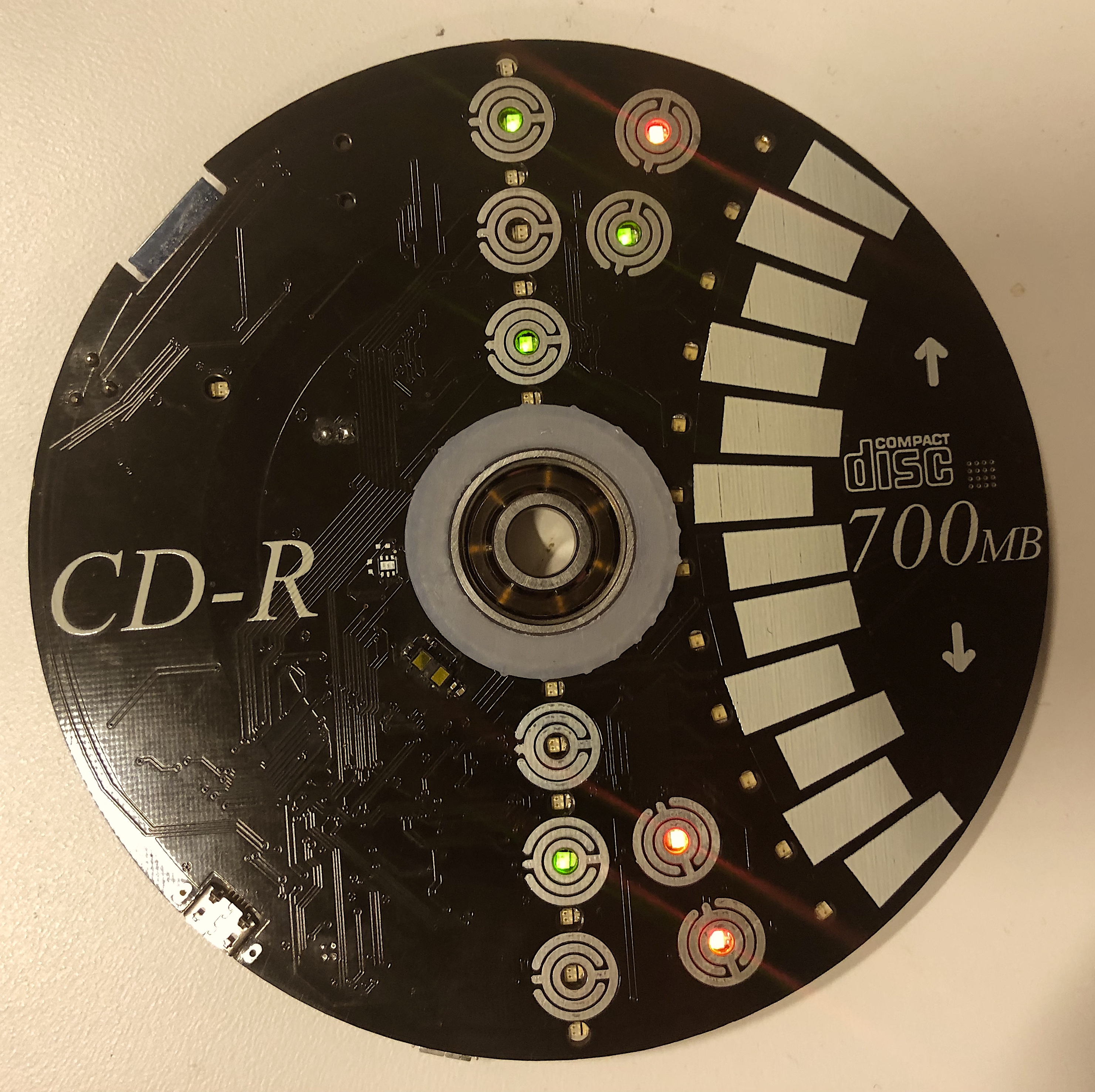 When spinning, the device has a POV display which users can use as a visual output for the measurements taken by the sensors (e.g., distance from LIDAR).